Well, I do not know LKY personally except in history books and newspapers, nor am I particularly affected or moved or have gained by what he does or did , because I am born in Malaysia and have lived my entire life in Malaysia, and I benefit more from Malaysia than I ever did from Singapore, but since it is such a momentous event, I will just cut and paste whatever I can find on the social media and gather them here to keep as reference.......

"When I learned to ride a bicycle, he was there. Once when I was just getting the hang of balancing on two wheels, he pushed me off from behind to get me started."

This is the Lee Kuan Yew eulogy the nation did not hear
Lee Hsien Loong gave a final eulogy on Sunday at Mandai Crematorium that was not aired live on TV.
SG.NEWS.YAHOO.COM

Death and Funeral of LKY

00:00  Thank you for following our live coverage
A parting quote from Mr Lee, who had given instructions for his ashes to be mixed with his wife's. Mrs Lee died in October 2010:

For reasons of sentiment, I would like part of my ashes to be mixed up with Mama's, and both her ashes and mine put side by side in the columbarium.
We were joined in life and I would like our ashes to be joined after this life. 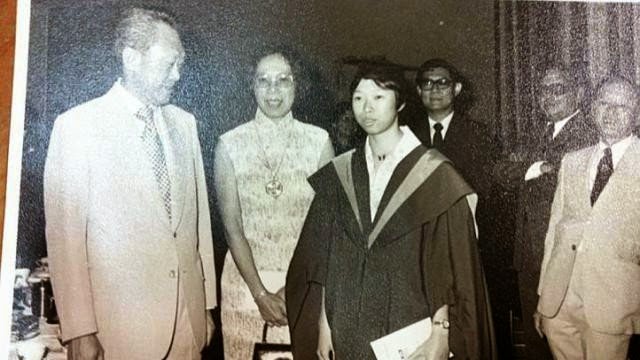 Mr Lee Kuan Yew and his wife Kwa Geok Choo attending the convocation ceremony of their daughter Lee Wei Ling, who graduated with a medical degree from the then University of Singapore in 1978. -- PHOTO: LEE WEI LING

23:57  Thank you for following our live coverage
Thank you for following our live coverage of Mr Lee Kuan Yew's final journey through Singapore. We also thank you for joining us over the past week, as we record a historical moment in Singapore's history,
Here's a recap of what happened today:
23:39  Dr Lee Wei Ling's eulogy to her father Lee Kuan Yew at Mandai Crematorium
The late Mr Lee Kuan Yew had developed Parkinson's disease three years ago which severely limited his mobility, said his only daughter Lee Wei Ling at the family's private cremation service on Sunday evening.
"He had great difficulty standing and walking. But he refused to use a wheelchair or even a walking stick. He would walk, aided by his SOs," she said at the Mandai Crematorium.
Dr Lee devoted a part of her eulogy to thanking Mr Lee's security officers (SOs) whom she said were an integral part of Mr Lee's life, even more so in the last five years.
Full story. 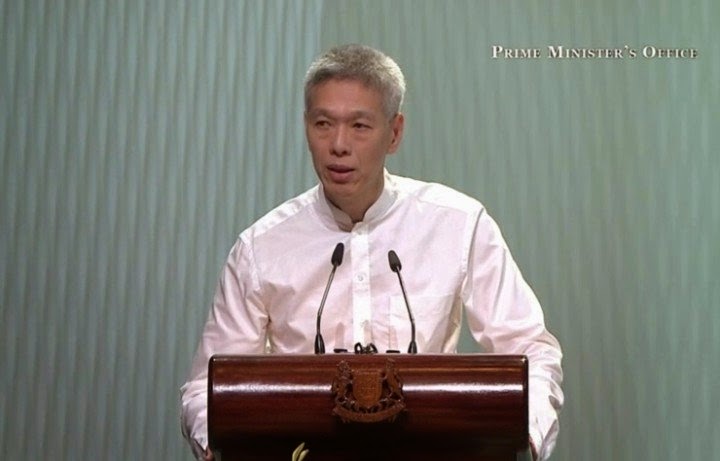 "Papa was immersed in his work for much of my childhood," says Mr Lee.
Referring to his wife Suet-Fern, Mr Lee shares an anecdote: "In September 1998, he gave Fern and me our copy of his memoirs, “The Singapore Story”, he penned a note with a tinge of regret: 'To Yang + Fern, You grew up while I was running around as I describe in this book." 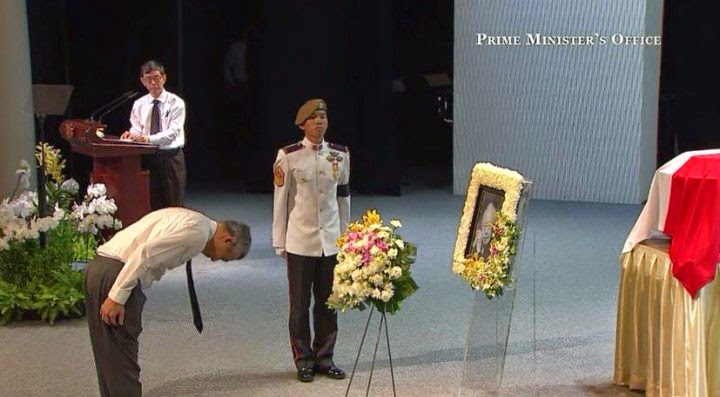 All 10 eulogies have been delivered. PM Lee Hsien Loong bows in front of the casket after he lays a wreat 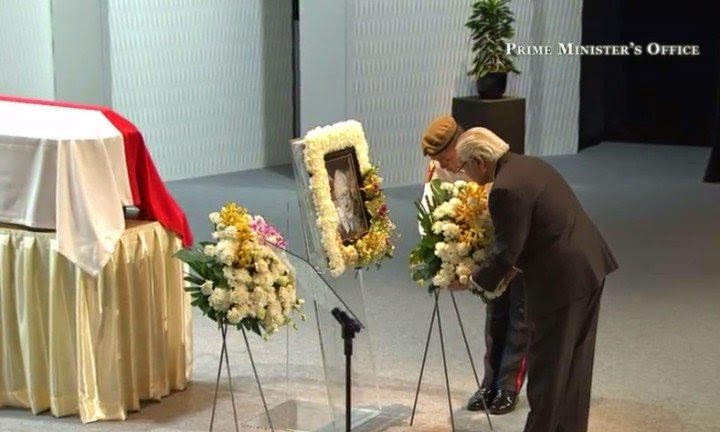 President Tony Tan Keng Yam lays a wreath on behalf of the State. 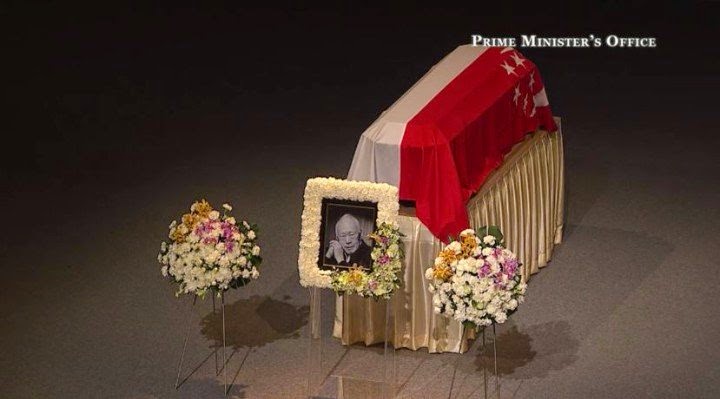 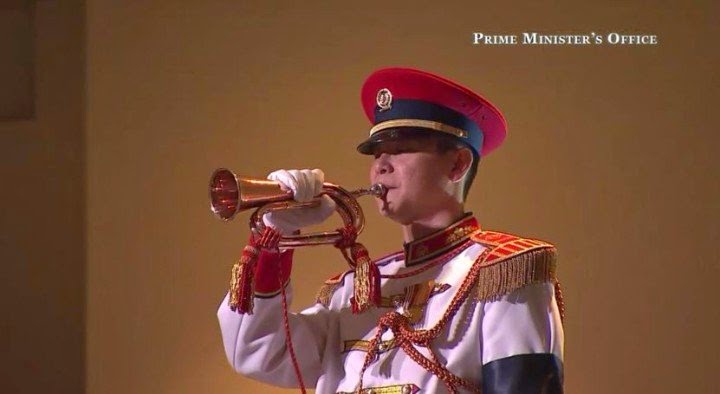 Guests rise. A lone bugler from the SAF Military Band sounds the Last Post, a final salute to the deceased. 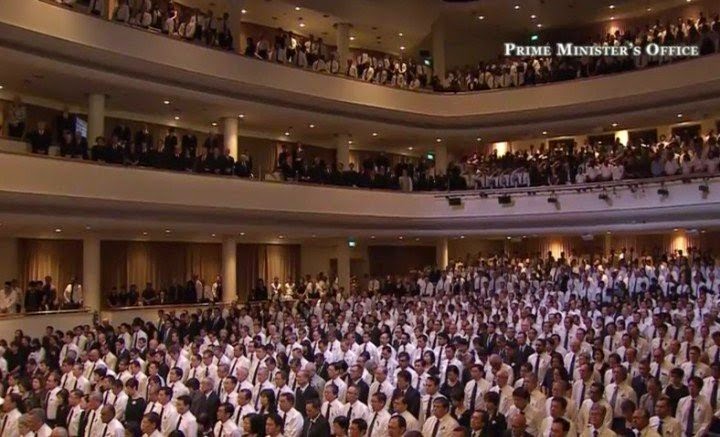 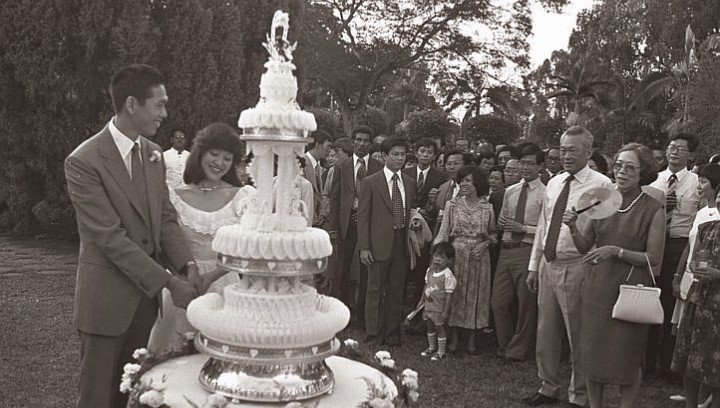 16:23  Mr Lee Hsien Yang's eulogy
He shares that when he got married in 1981, the late Mr Lee was keen to have them live with them at Oxley Road. "Mama, perhaps because of her own difficulties living with her in-laws as a new bride, and Fern too, had reservations, so upon marriage, Fern and I made a home of our own.

16:23  Mr Lee Hsien Yang's eulogy
He also talks about their first family holiday in Cambridge, to visit his brother Lee Hsien Loong who was studying there.
His parents took the family to Stratford upon Avon, Shakespeare’s birthplace - the place where his parents had secretly married in December 1947. 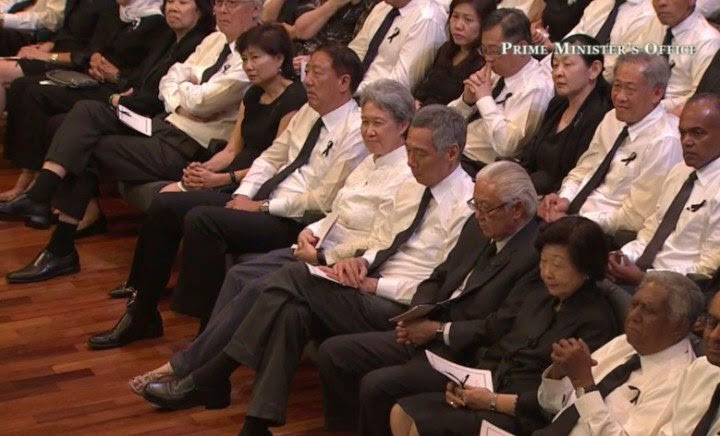 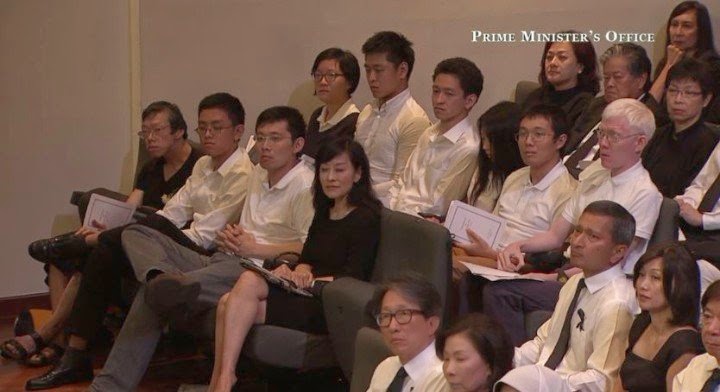 16:25   Mr Lee Hsien Yang's eulogy
He talks about how the family supported each other: When his brother Hsien Loong’s first wife, Ming Yang, died in late 1982, the family felt the weight of the tragedy.
"Fern and I wanted to help the family hold together and create some happy occasions to continue to share," he says.
The family started to organise family dinners, and to celebrate birthdays. 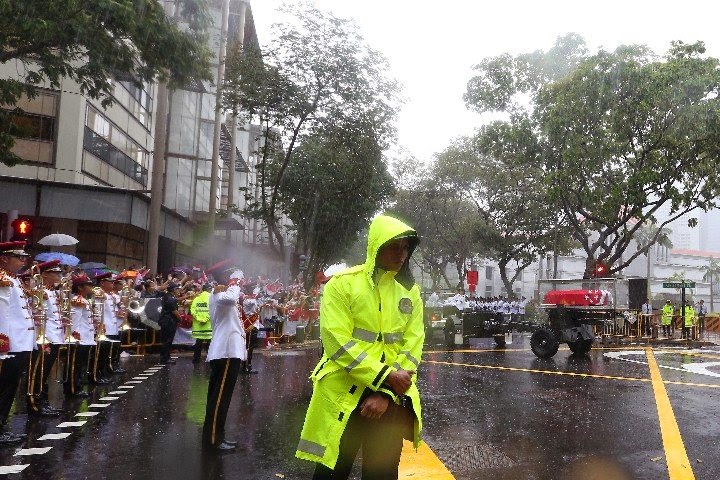 In a sombre mood, Singapore's founding Prime Minister Lee Kuan Yew embarked on his final journey through Singapore on Sunday, March 29.
At 12.40pm, his coffin left Parliament House, where he had been lying in state since March 25. Full story. 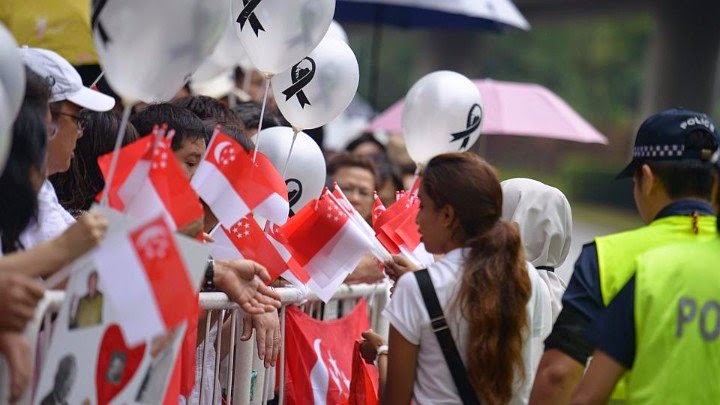 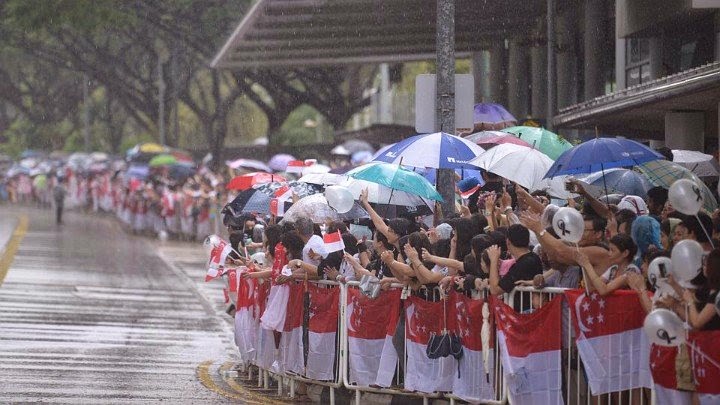 More than 100,000 people lined the streets along the State funeral procession route on Sunday to bid farewell to the late Mr Lee Kuan Yew, according the State Funeral Organising Committee.
Full story. 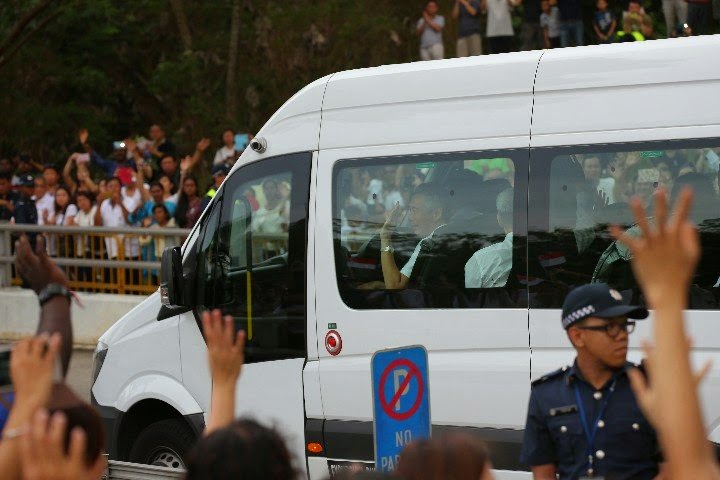 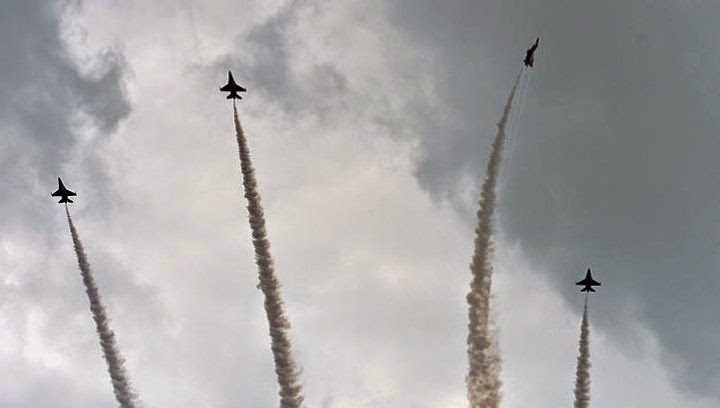 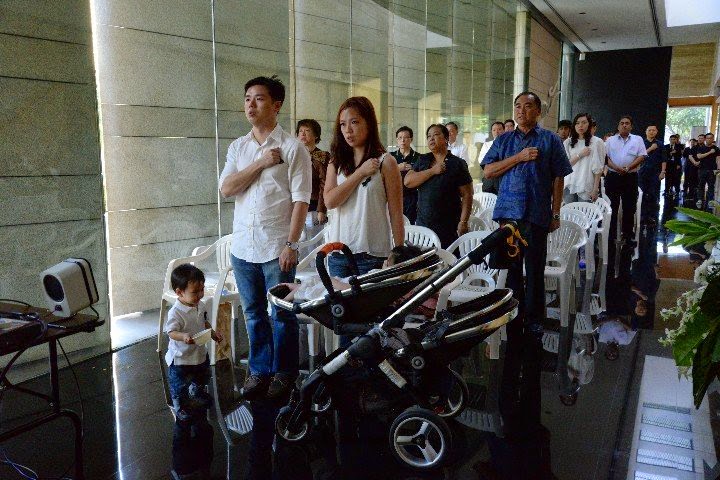 Some 100 people turned up at the Singapore embassy in the heart of Manila's financial district - all solemn, silent, in black or white - to watch from more than 2,300km away the final journey of Singapore's founding father, Mr Lee Kuan Yew.  Full story. 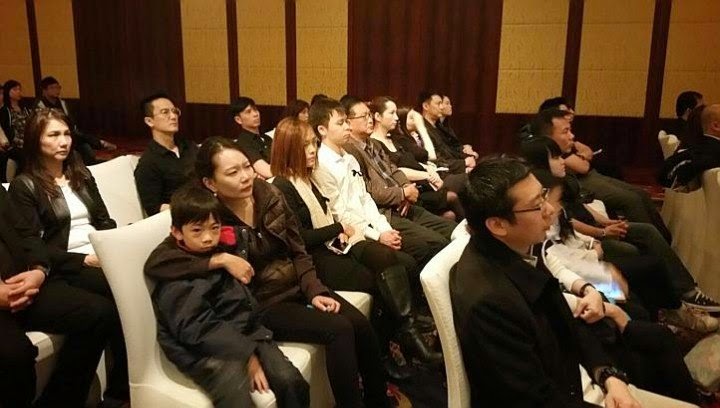 A mostly Singaporean crowd of about one hundred also gathered at the High Commission in Kuala Lumpur for the live telecast of the state funeral of Mr Lee Kuan Yew, instead of staying home to watch the procession that was broadcast live across Malaysia. Full story.
Being far away from Singapore did not stop several people among the more than 300-strong crowd in Beijing from sobbing as they watched the live telecast of the state funeral procession of Mr Lee Kuan Yew on Sunday.
21:11  ST readers capture moments of Mr Lee Kuan Yew's last journey

It wasn't just the media who were out on the streets photographing a historical moment on Sunday afternoon. Many members of the public also documented the emotional journey as Mr Lee Kuan Yew's cortege made its way from Parliament House to the University Cultural Centre.
The Straits Times received some 100 crowd-sourced photos via a photo-submission site.
Here's a selection of photos. 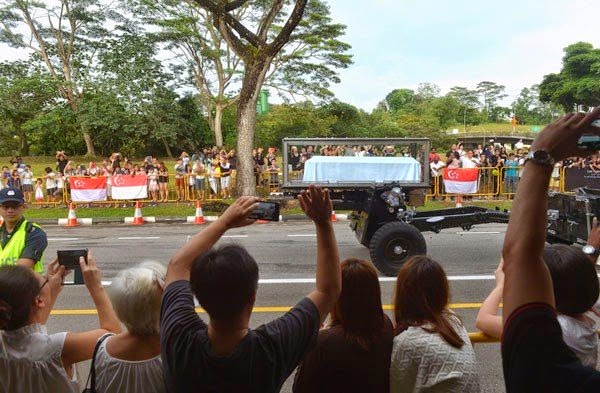 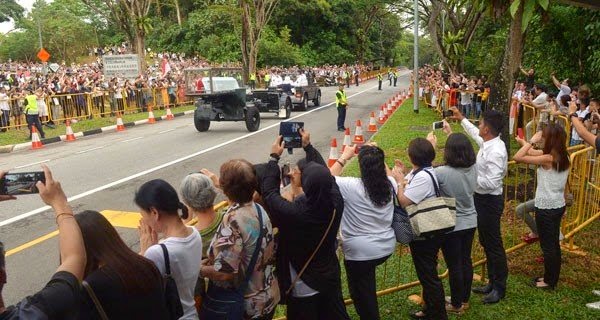 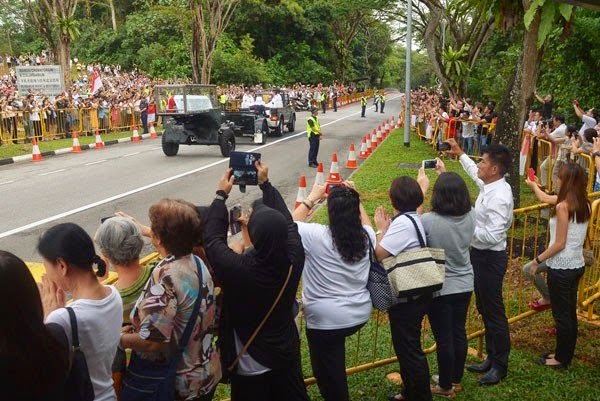 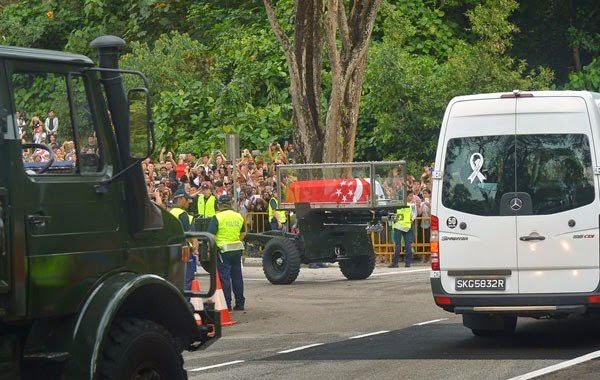 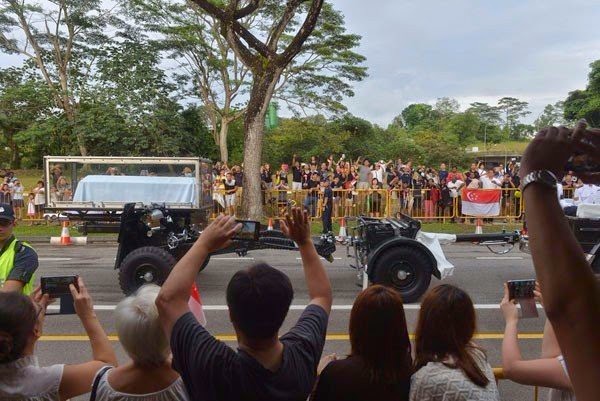 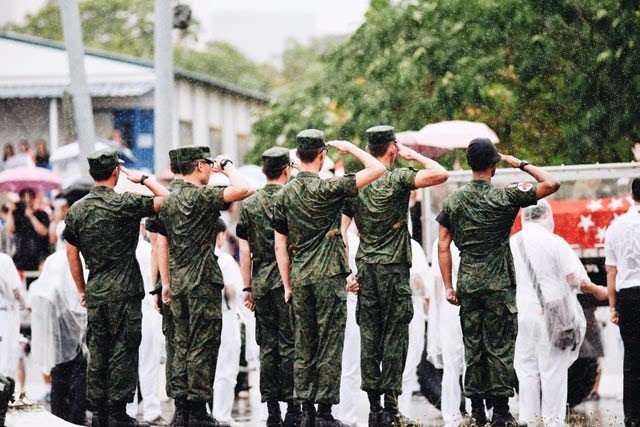 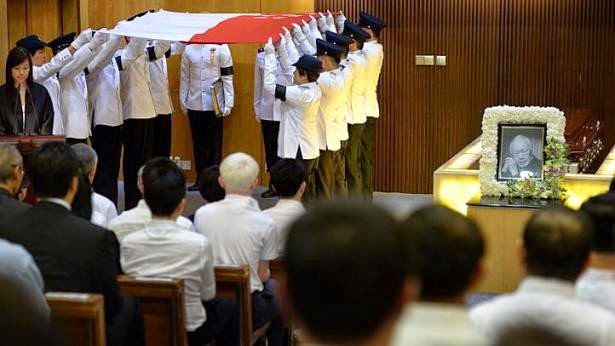 The pallbearers folding the Singapore flag after laying the casket of Mr Lee Kuan Yew in the ceremonial hall at the Mandai Crematorium for the private family funeral on March 29, 2015 -- ST PHOTO: KUA CHEE SIONG 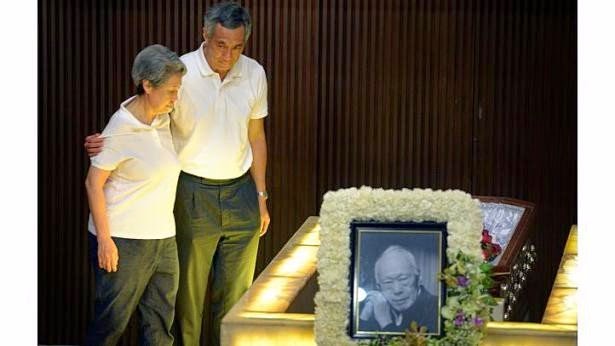 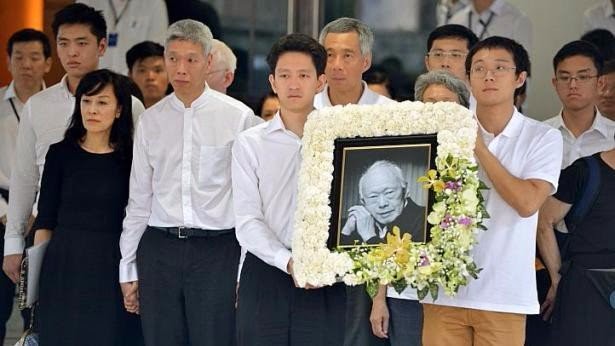 22:22  Mr Lee Kuan Yew's private family farewell at Mandai Crematorium
Mr Lee Kuan Yew's family said farewell to him on Sunday, March 29, evening, in an emotional ceremony at Mandai Crematorium. The casket arrived at 6.10 pm and was borne aloft to Hall 1. Daughter Lee Wei Ling placed the memorial portrait in front of the casket.
The national flag draping the coffin was then lifted and folded by uniformed officers. The flag was then handed to his eldest son Lee Hsien Loong, who is the Prime Minister.
The coffin cover was lifted, in a symbolic move marking the mourning of Mr Lee the public figure, to Mr Lee, the family man. As his body lay in the open casket, family members took turns to share memories of their father and grandfather.
Full story. 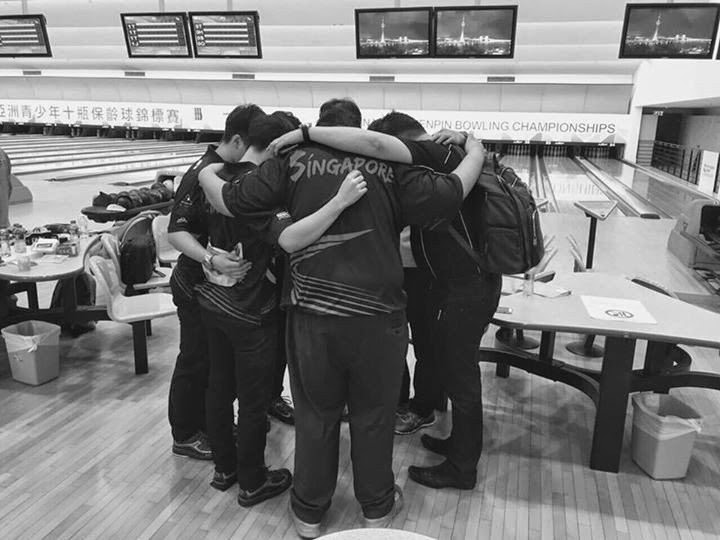 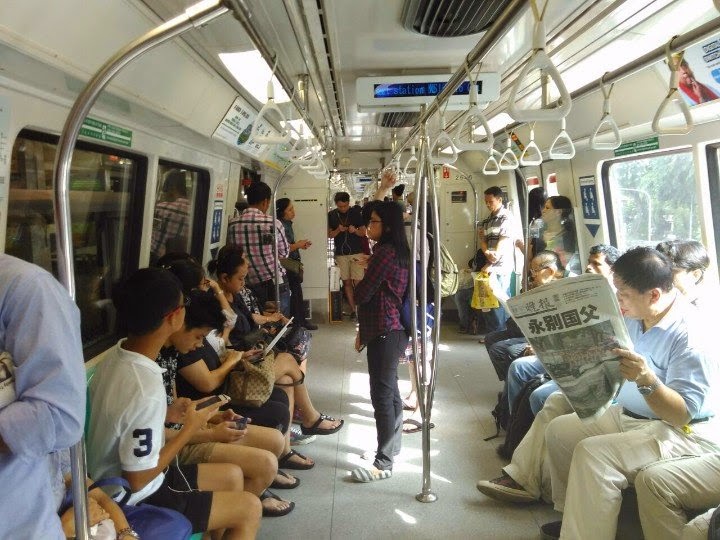 Announcements are being made. "Dear passengers, this train will stop here to observe a minute of silence for Mr Lee Kuan Yew." Some people are watching the eulogies on their iPads. The minute was solemn. 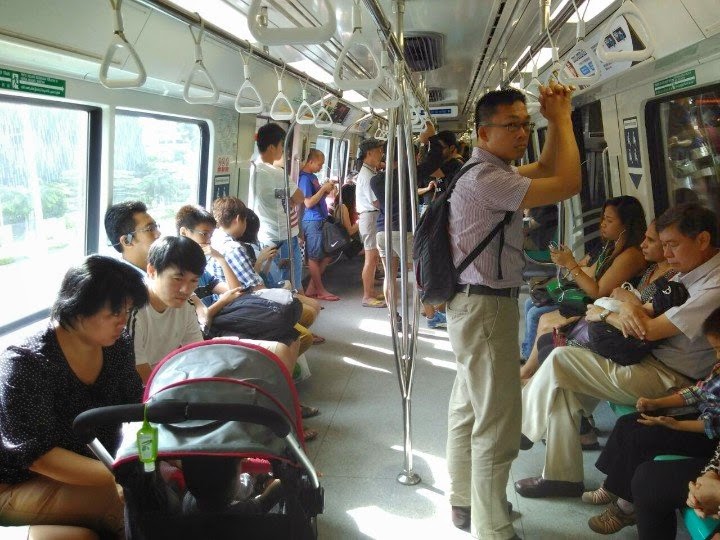 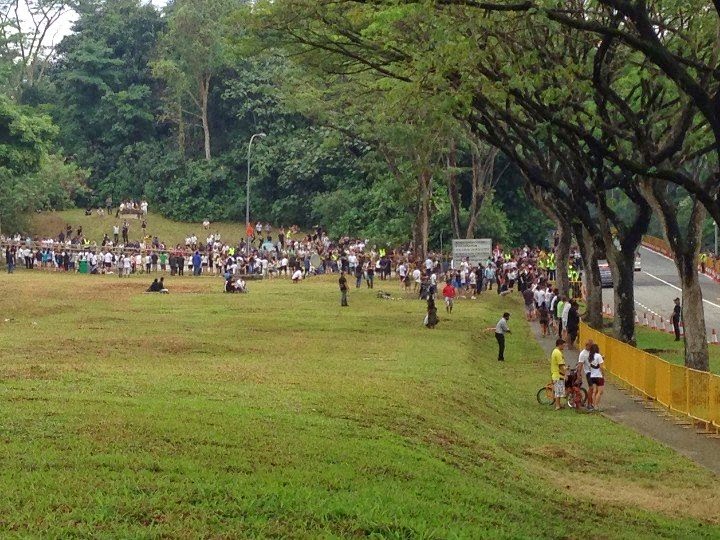 16:39  Funeral service ends
The funeral procession will make its final journey to Mandai Crematorium for a private cremation service.


Rain is pouring at the Padang and other parts of Singapore, but mourners have come well-prepared with umbrellas and are not seeking shelter.
"Not even heavy rain can move us away from the road to send Mr Lee Kuan Yew off on his final journey," says Mr James Wong. http://str.sg/JmE
ST VIDEO: DESMOND WEE

‪#‎LeeKuanYew‬'s cortege passes by Commonwealth MRT as it makes its way towards University Cultural Centre where the state funeral service will be held. The crowd chants "Lee Kuan Yew!". ‪#‎RIPLKY‬
For full coverage, go to: http://yahoosg.tumblr.com/leekuanyew
For more videos of the coverage, go to:https://sg.screen.yahoo.com/remembering-lee-kuan-yew/

19 hrs · Edited ·
A minute of silence is observed outside City Hall MRT as the siren is heard in the background. http://str.sg/Jmq